Lighting is probably the most important factor for any space. Not enough light and it’s a frustrating and unpleasant place to be. Too much light, light that is the wrong color or light coming from the wrong direction, is almost as bad.
Incandescent, LED, Florescent, Halogen and more, there are many lamp types to choose from but at this point I pretty much only install LEDs. The cost has come way down, the life expectancy is measured in tens of thousands of hours, they don’t generally get hot like incandescent light bulbs and there is a very broad variety of LED form factors. From traditional light bulbs to strips of virtually unlimited length, LEDs can be used just about anywhere and can produce just about any color.

There are however several specifications to consider. Most important are Color Temperature and Lumens. For more on these details, jump to More Lighting – Technical Details at the end of this page.

When it comes to installing LEDs there are two starting points, AC or DC. High voltage AC power is what you get from an electric outlet. Low voltage DC is most often known to come from batteries. Although there are more AC LED products available all the time, internally LEDs are primarily DC which means that in order to connect them to house current, an AC>DC power supply of some type is needed. 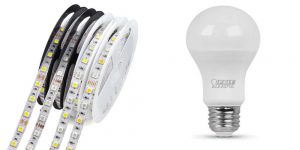 In the case of standard Edison type LED light bulbs, the AC>DC conversion is built in to the bulb while LED strip lights for example are powered by a separate AC to DC power supply.

The advantage to AC powered LED lamps is simplicity, you can buy an AC powered bulb or fixture and just use it. DC powered lighting can be a bit more complicated to install and long distances require planning but dimming and color control on the DC side is more accurate and because it’s low voltage, installation and wiring is more flexible.

One of my favorite projects is the lighting around this deck area. 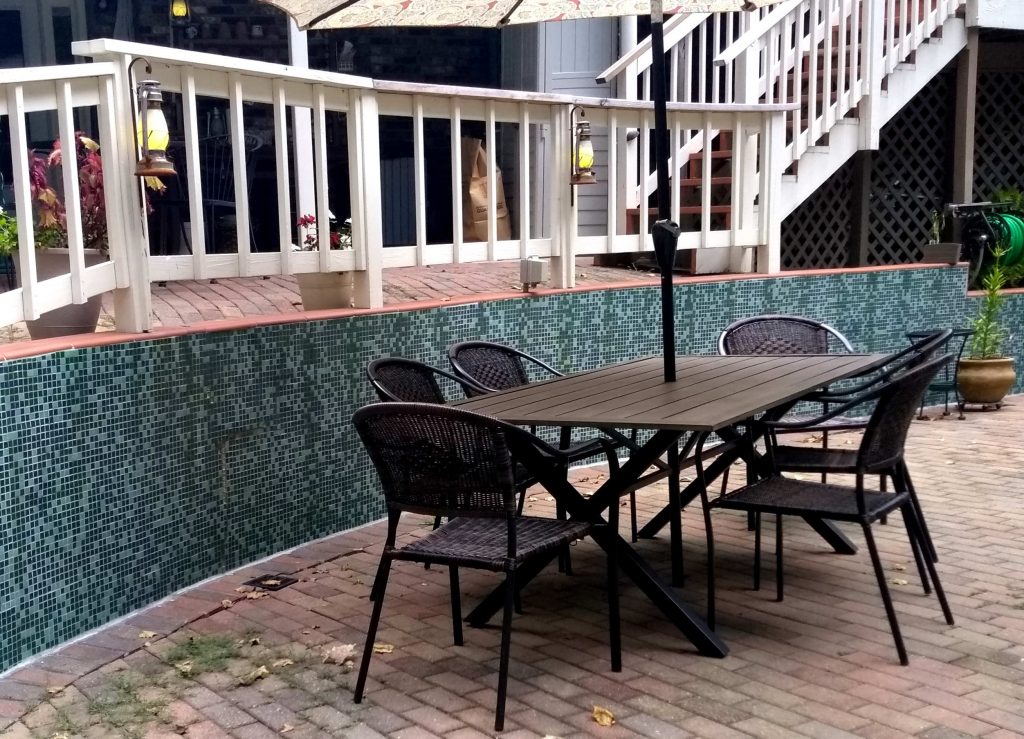 These real oil lamps have been converted to LED and they are all connected to a dimmer system with a simple remote control that has presets for 25%, 50% and 100% brightness as well as dimmer ‘plus’ and ‘minus’ for fine control of the brightness. 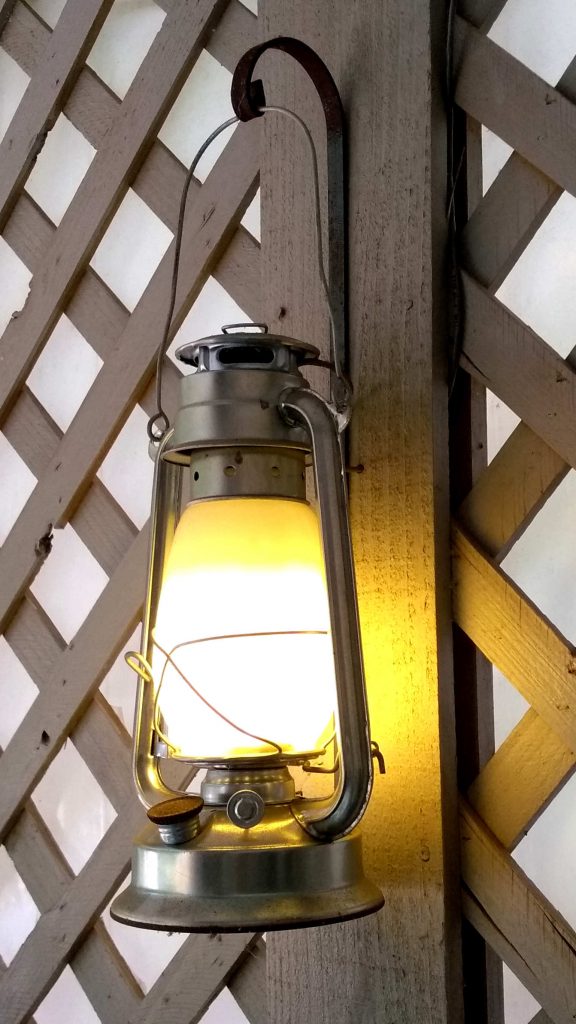 Many of the lamps have waterproof warm white LED strips inside plus an additional layer of color temperature adjusting filter to make them even warmer so the color is closer to a natural flame. For lots of detail about making these lamps, have a look here.

Another important aspect of a creative lighting installation is the wiring.

Whenever possible I prefer to hide wires. That’s obviously easiest if there are areas that are not visible or at least less visible where wires can pass and not be noticed but that is often not the case. For this outdoor lighting project, most of the low voltage wiring passes through various purpose cut channels under or behind the wood framing.

This same project has utility lights in areas that need night access, there are low profile lamps to illuminate the steps and there are other atmospheric lights that highlight plants. 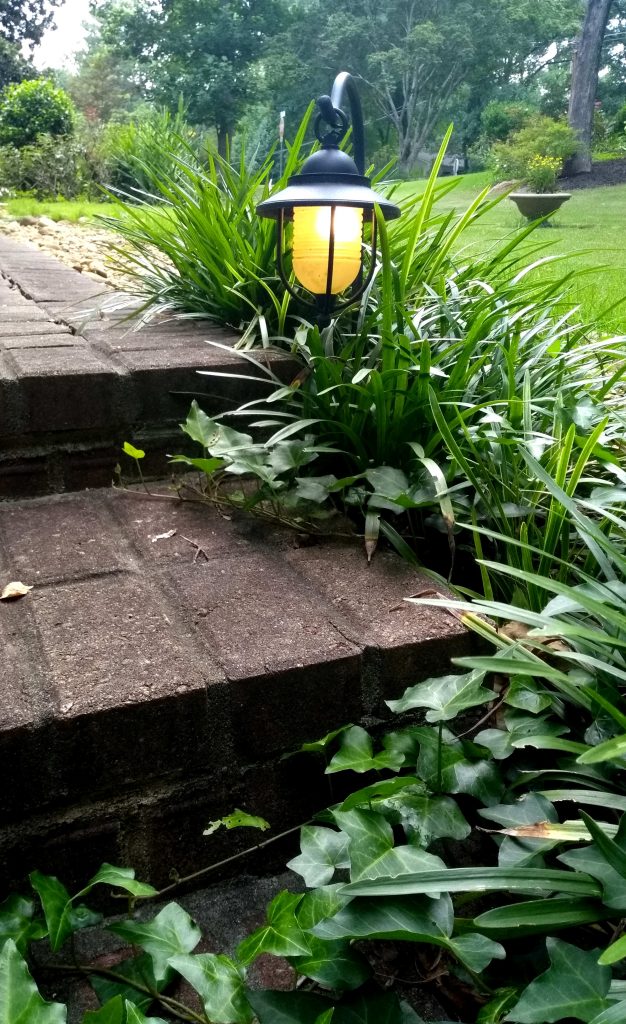 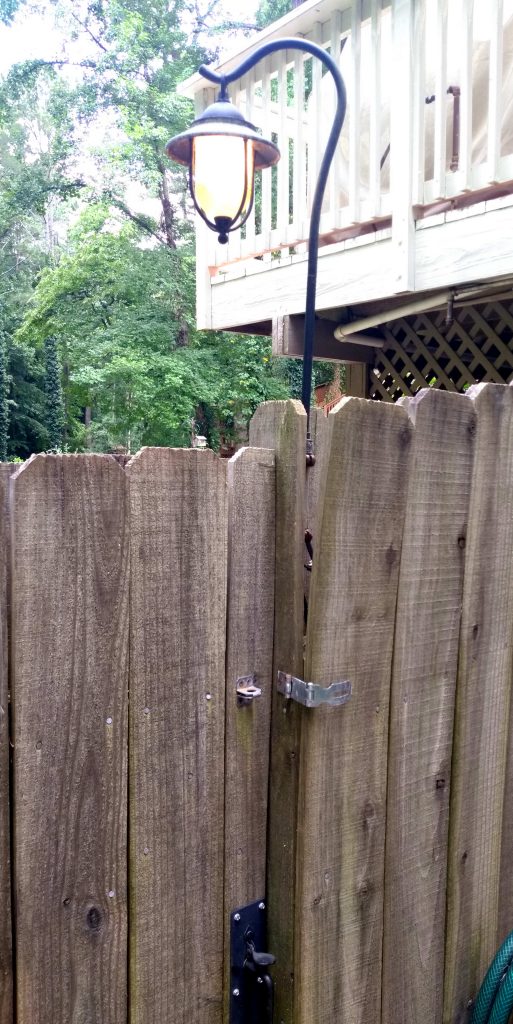 While somewhat more basic, path lighting is also a great addition. It can add character while simultaneously making it easier and safer to navigate what might be a dark and hazardous walkway.

I like light in the shower, especially if it’s a nice ‘golden hour’ (sunrise/sunset) color but since its often impossible or at best inconvenient to have a window in your shower stall (and I don’t generally get up at 5am anyway), two of the recent bathrooms have LED light panels in the shower areas. 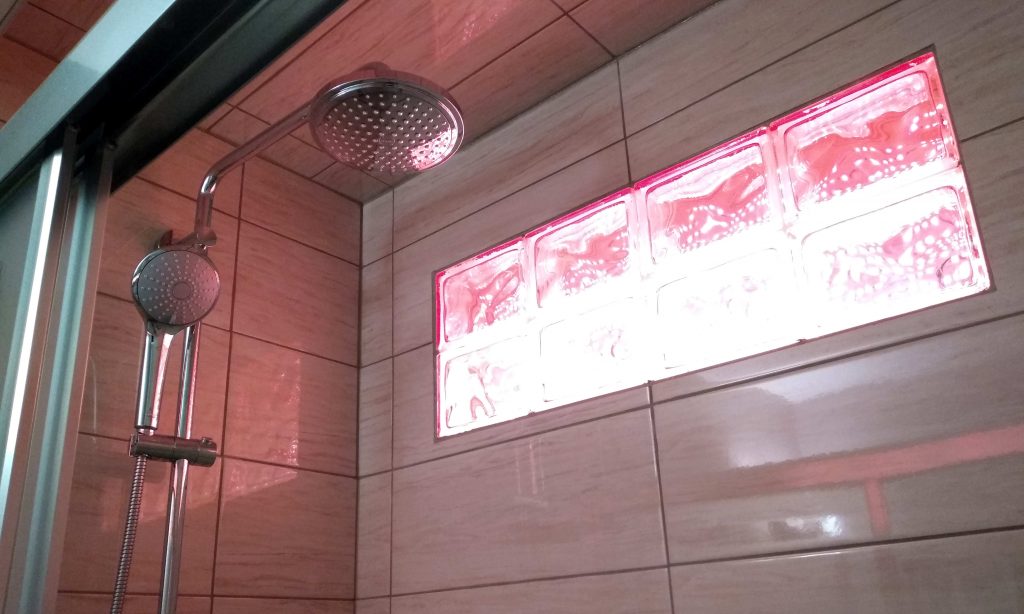 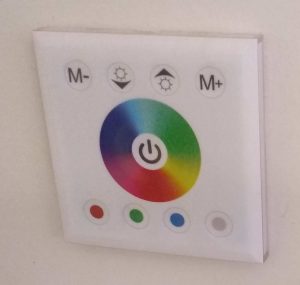 This one uses glass blocks to simulate the window. Behind it are RGBW LED strips controlled by a DC RGBW dimmer.

Details about this bathroom are here.

RGBW is Red, Green, Blue and White. By managing all four of the colors, the dimer control can provide a wide spectrum of colored light or just plain white. 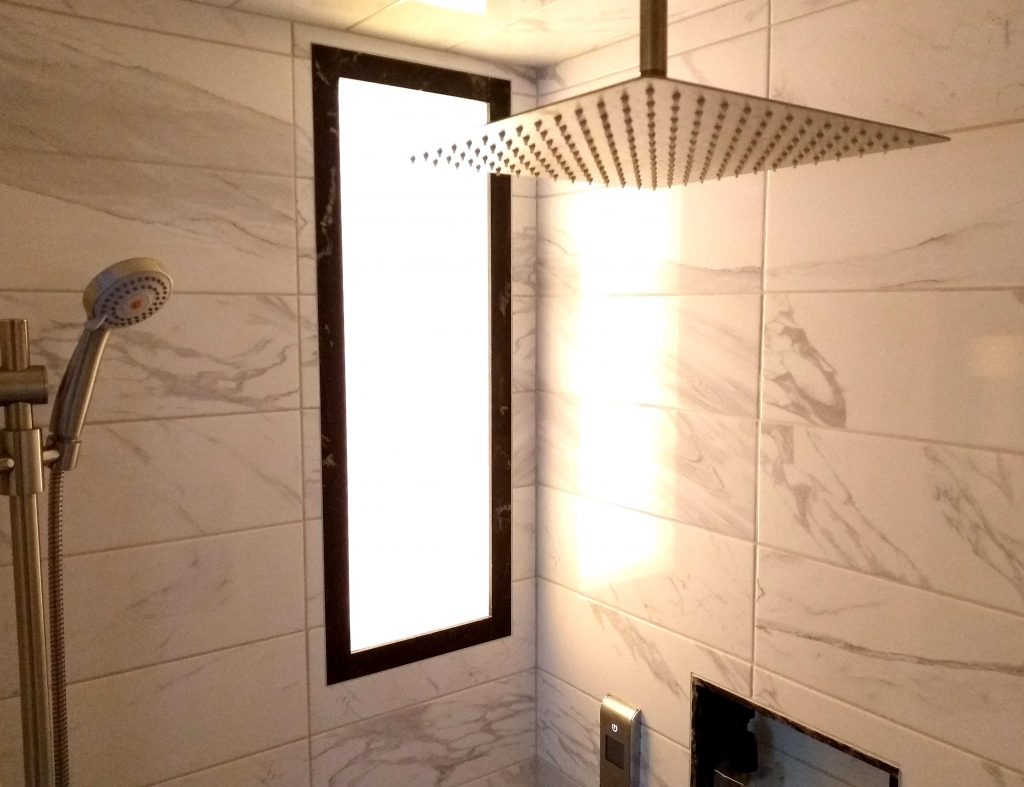 The same RGBW controller is used as well but instead of glass block, the panel is covered with frosted glass and mounted with a granite tile frame.

To see more of this bathroom, go here.

This cabinet has warm white LED strips inside and on top. 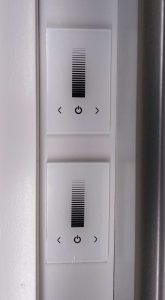 Between all the glassware, bottles, transparent glass shelves and doors, the interior lights produce a sparkly atmosphere. The top strips throw a nice light on the various knickknacks displayed there.

The light strips are controlled by a pair of single channel DC LED dimmers.

The combined light output of the two sets of LED strips is enough to do things behind the bar where the cabinet is located but there is also a dimmable warm white LED fixture on the ceiling for those times when more light is needed. 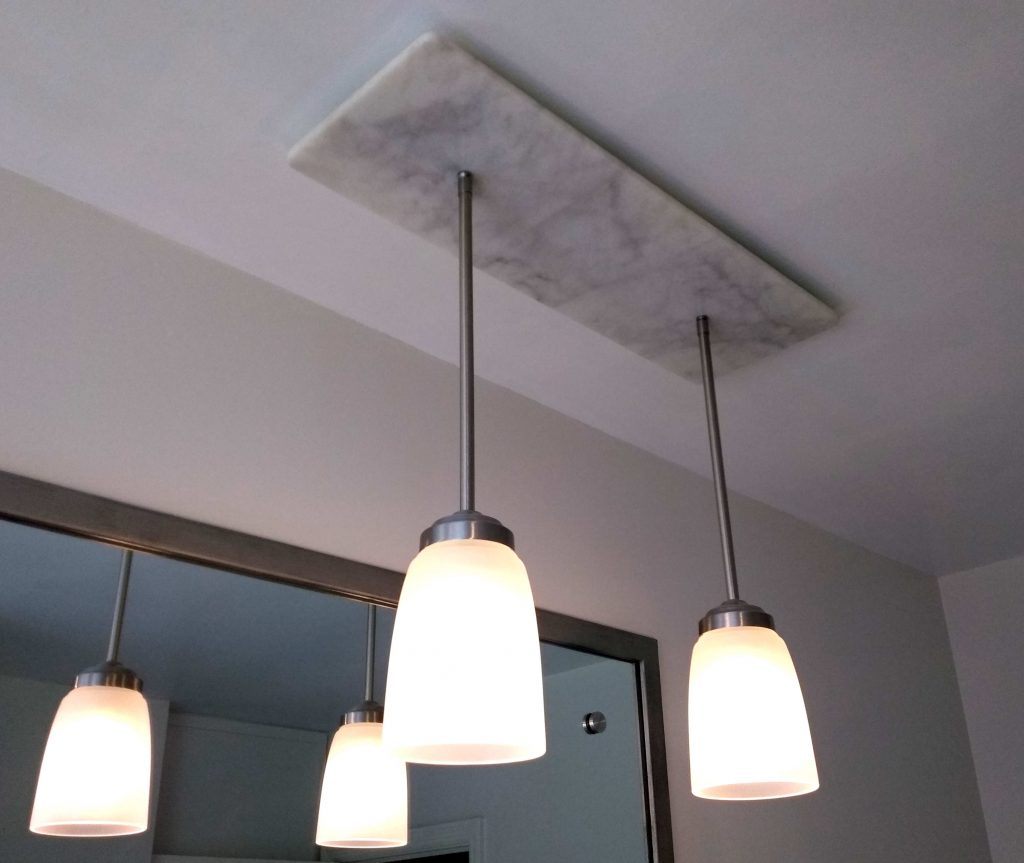 This ceiling fixture is a set of two, made up of some basic teardrop pendant lights, mounted to a slab of marble, the same marble used throughout this bathroom as trim, baseboard and accent pieces.

Under cabinet lights are probably the most ubiquitous lighting that is one step beyond basic light fixtures. LEDs have made this much easier and better. 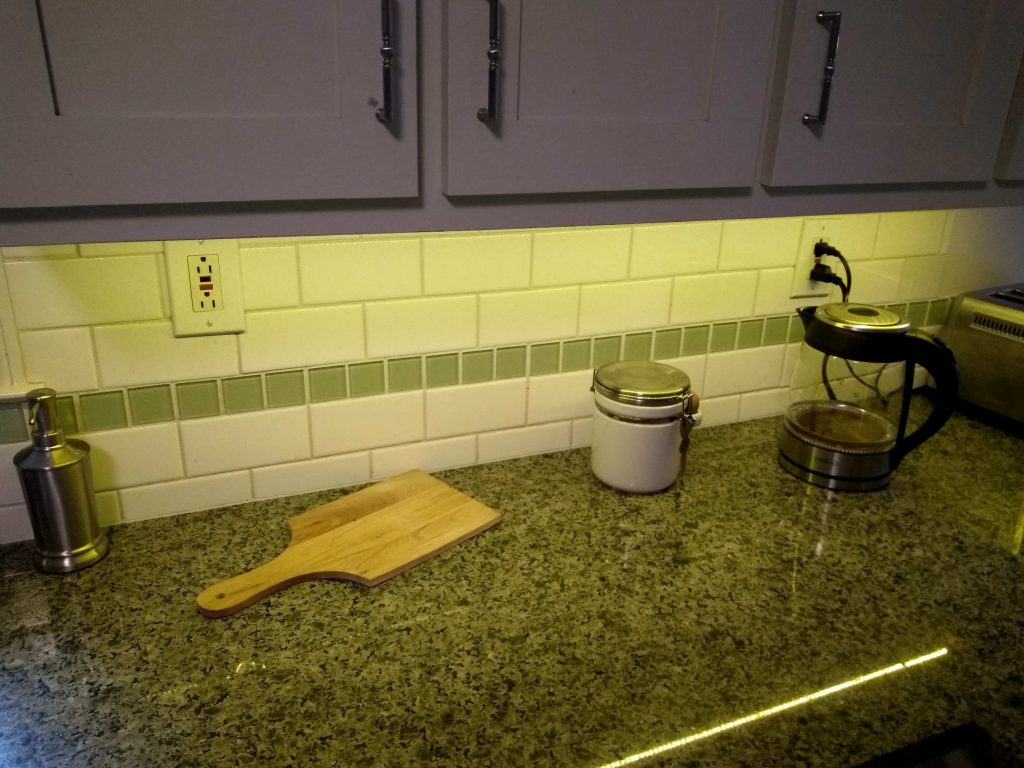 Traditional halogen puck lights and other similar lamps have a tendency to cook themselves as the heat just sits under the cabinet. LEDs run much cooler and are very tough so are perfect for these less than optimum locations.

Color temperature is a color rating system (measured as degrees Kelvin) – This is a technical specification that represents the color of the light. There is also a color rating system that uses words such as Warm-White or Cool-Blue. The confusion is, measuring the color of light as degrees Kelvin is a direct contradiction to those word descriptions which are based on how we experience things.

More or less, the color temperatures we are accustomed to range between candlelight and sunlight and most people would say a flame that is yellow or red is hot while blue, like ice or water is cool. The contradiction is that “cool blue” sunlight on a clear day is about 5600K, much hotter than warm yellow candlelight that is only about 1500K.

So, when a product label talks about “warm white”, this is the apparent color of the light, that its more yellow or warm vs blue or cooler. Warm white is generally equivalent to a typical ‘old-fashioned’ incandescent light bulb which is about 3000K. For reference, a halogen lamp is a tad warmer at about 3200K. The early LED lamps were generally only available in a cool blue color which ranged anywhere from about 4000K to about 6000K but there is much more variety available now.

In most rooms I generally prefer warmer light, around 3000K. For closets and utility areas I find something a bit less warm like 4000K-5000K is OK.

Lumens is a complicated and technical subject that is now commonly referred to on LED and fluorescent light packages but for your home its simple. Lumens are the brightness of a light. More lumens mean brighter, i.e. more light. LED lights produce about 60 lumens per watt. As a reference, an old fashioned 6o-watt lightbulb produces about 800 lumens. A 75-watt bulb about 1100 lumens. In other words, a 15-watt LED fixture will produce about 900 lumens, a bit more than a 60-watt bulb.

If you want perfection you should also consider CRI.

Light is actually made up of a wide spectrum of light waves. The accuracy of that spectrum determines how an object with a particular color will actually look, how accurately its color is rendered. This is the Color Rendering Index or CRI. CRI is measured on a scale from 0% to 100%, higher is better. Generally, a light with a CRI around 80% is good enough for utility applications. While a light that is closer to or over 90% is considered quite good at rendering accurate color.